On this gray, cold, drizzly day, I’ve been thinking obsessing about the symbolic meaning of the number 4. What is a poet without obsessions, right?

In Tarot for Your Self, Mary Greer, writing about fours, lists several key words that relate to this number, including “stability, foundations, law and order, conventions of society.”

She goes on to say that the basic conflict of the number 4 is the tension between the desire for security and stability and the desire for change, expansion, and growth.

Four seasons of the year.

Four weeks in a month.

Four lines in a quatrain.

The Emperor, fourth card of the tarot deck, archetype that includes father, the patriarch. 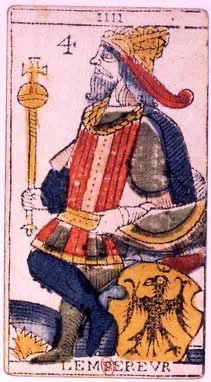 Carl Jung weaves the number four into his thinking about archetypes and the human psyche.

He identifies four basic archetypes: the Self, the Shadow, the Persona, and the Anima/Animus.

He identifies four functions of the personality: thinking, feeling, intuition, and sensation.

For in-depth discussions about these four archetypes, I recommend This Jungian Life, a podcast devoted to exploring the psychology of Carl Jung and its application to contemporary life.

Listening to this podcast led me to Jung’s concept of the quaternity, or groupings of four.

Daryl Sharp’s Jung Lexicon defines a quaternity as “an image with a four-fold structure, usually square or circular and symmetrical; psychologically, it points to the idea of wholeness.”

We’re in an Emperor year, but it feels like the Emperor is reversed.

According to Mary Greer, when the Emperor card shows up reversed in a reading, it indicates: “Autocrat. Self-righteous tyranny. Or, weak-willed, unmanly cowardice… Trust betrayed. Failed leader.”

All of these words can be applied to the current occupant of the White House as well as most members of the Republican legislature.

Where can we as a society find the stability, security, and order we seek? How can we heal the planet and also ourselves? By integrating our shadow and becoming whole. By reconfiguring old patriarchal values, a square pillar, into a circle divided by a cross, a mandala for wholeness, stability through inter connectivity.