The pupils of my eyes
are very small,
as if the dark spots
were nostrils.
When I look at them
in the mirror, I feel
cold and ugly.
I float in and around
whatever is bothering
me without knowing
what it is.

The above passage is taken directly from my diary, which I wrote on 11/11/81, 6:30 pm, in Athens, Georgia. Like many twenty-one year olds, I turned to my journal whenever I was feeling blue. I took the passage and shortened the phrases, turning it into a poem of sorts. I liked the image of pupils like nostrils.

Most of the diary entries from that year are about my relationship with my boyfriend. Here’s a quote referring to him.

I lie. I don’t love. I am not kind to people. Conrad was right in his idea that people are dark and savage in their hearts. My heart feels like lead in my chest. Do I dramatize these feelings? Maybe I’m feeling sorry for myself because I’m not making any progress with developing my thoughts and finding an art. The thought of being an artist has been in my mind for a long time, but now I know I’ll never be one because my personality is two-dimensional, as Stephan would call it.

Stephan is what I’m calling my boyfriend at the time. I don’t want to say his real name, because he comes off here as being very critical of me. In truth he was a fun-loving, creative person. I was suffering from depression during our time together but didn’t realize it. He was very patient with me, for the most part, as patient as any twenty-three year old guy could be. I cried a lot and was moody, and, like I wrote in the found poem, I had no idea why I was so sad. I’d start fights with him just to have something to blame my feelings on. I’m glad I finally broke that pattern. It only took me thirty years!

I remember when we took these pictures. We were walking around Athens, looking for interesting shots, but also saying goodbye. We would both be leaving soon, Stephan for Stockholm, and I for Madrid. I still love Athens, and remember my time there as magical. I think anyone who lived there during the late seventies and early eighties feels the same way. 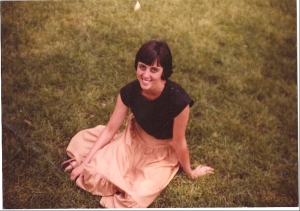 A group of us drove from Athens to NYC in one weekend to hear the Side Effects play at the Peppermint Lounge. Or it could have been CeeBee GeeBee’s. I went to both of those clubs to hear bands from Athens.