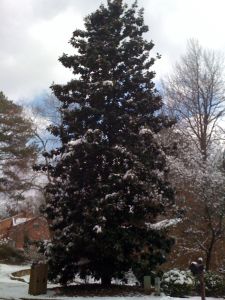 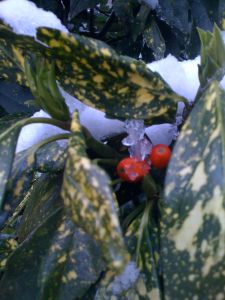 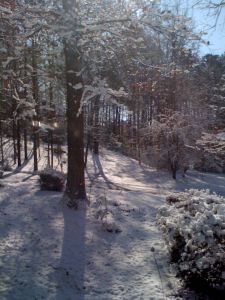 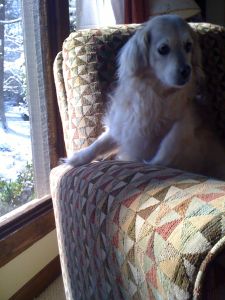 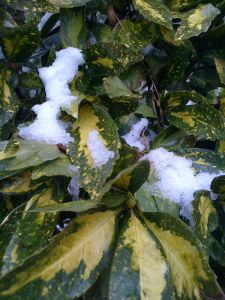 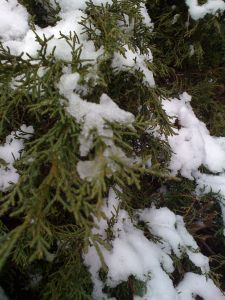 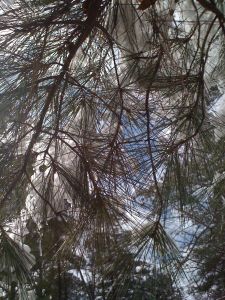 Not that anyone needs to know, but my derriere was already sore from Vicki’s challenging yoga class yesterday, so slipping and falling on my butt while going down an icy slope didn’t help matters. But the extra padding with which nature has endowed me came in handy, and now I’m fine, drinking tea and eating leftover candy canes.

Most sensible people stayed inside today in my city, but not wanting to feel trapped, I debuted my new purple boots and my red pleather parka and headed out to meet the sharp, cold air. A dusting of snow made the sidewalks less slippery, and the tread on my new boots saved me from all but one fall.

A little boy who stood guard at the top of a hill said,”I saw these two cars crash into each other, and then one of them hit the fire hydrant, so I’m trying to get people to turn around.” The kid had a lot more sense than the drivers, because on my way back he was still there, bemoaning the fate of a moving truck stranded at the foot of the hill.

My house is drafty, and there’s a chill in the air no matter how high we turn up the heat, but still I’m grateful. So many people are outdoors because of homelessness, or even if they have a roof over their heads, they can’t afford to turn on the heat. Walking three miles in the cold has made me sleepy, even though I was bundled up, and it makes me think about how hard and tiring it is to live on the streets.

The crows and hawks were out today too, but the squirrels stayed snug in their nests.