In 1992,  when my son Casey was two, my grandmother died, and so we drove up to Scranton, PA with my parents to attend the funeral. My father’s mother wrote poetry, and because of this I felt a special attachment to her, even though I only saw her once a year growing up.

Every summer, wherever my family lived, we would pack up the sky-blue Ford Galaxy 500 and drive the highway miles to spend two weeks with both sets of grandparents in Dunmore, PA, a borough of Scranton in the Lackawanna Valley.

There were four children, so three of us would settle into the backseat while the fourth would wedge between my parents in the front seat. This was before bucket seats, when the interior of a car resembled a couch rather than a recliner. My dad would drive the entire way, and whoever sat between my parents had the luxury of being able to lie across my mother’s lap to sleep away the miles.

The backseat, however, was a different place. No air conditioning, the windows down, hot wind would blow across the cornfields into our faces for hundreds of miles. When we grew tired of drawing, reading, or weaving potholders on a plastic loom, we would squabble with each other until my father’s freckled arm, always stretched across the front seat, would start waving wildly in our direction in an attempt to swat us into docility.

The occasion of my grandmother’s funeral found me once again in the backseat of my parents’ car, this time a station wagon with air conditioning. My mother and I sat in the back with Casey strapped into his car seat. He was a champ, considering he had to stay locked in place for two days as we drove from Atlanta to Scranton.

We took some time during that trip to visit my dad’s favorite diner, Coney Island Lunch for one of his Texas Coney Island wieners, food he probably should have avoided considering his struggle with ulcerative colitis and the many surgeries he had already endured.

The way home from the funeral felt like the old days of driving under the threat of my father’s arm. He had broken down in tears at the service, but for reasons only my father could explain,  his grief morphed into anger toward my mother and the rest of the world. He raced back to Atlanta with us in tow,  a black cloud of  negativity seeping from his pores. He drove at breakneck speed until my mother and I pleaded with him to pull over to let someone else drive. That was the last road trip I made with my dad.

Painting by my sister, Patrice Needham.

My sister  took a few pictures of us while we wandered around Scranton, whose early twentieth century architecture charmed us after the glass towers of Atlanta we were accustomed to seeing. She painted the picture from a photograph, and then gave it as a gift to my mother and father-in-law. Katherine’s maiden name was Casey, which is why we named our son Casey. Another connection is that Sean is wearing his Berkshires t-shirt (which I still use as a night shirt), the place where my in-laws lived every summer.

I rescued the painting from Katherine’s house since she’s planning on selling the place in the Berkshires. Now that she’s getting on in years, she can’t travel there by herself, much less live there alone for a summer.  I like my sister’s photorealist style of painting. Her more recent work is plein air water colors, which I also find very beautiful. This one was painted at a beach trip we just took, on a postcard size water color block. 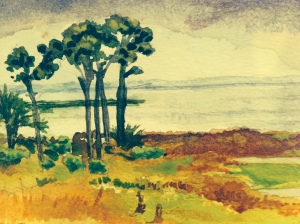