Things That Are Silent, Rethabile Masilo’s first full-length poetry collection, is published by Pindrop Press in the UK. The result is a stunning work of art edited by poet and publisher Jo Hemmant

Voted poet laureate of the Internet, Masilo is a poet, writer, and human rights advocate well known to those of us who have ventured into the world of online poetry.

Though I found Masilo’s work via a virtual community, there is nothing virtual or second hand about the way he communicates in verse.

Rethabile Masilo connects directly and honestly with the reader through poems that stand on the courage of their own convictions.

The book begins with “Letter to Country,” a love song to the speaker’s homeland of Lesotho.

Lesotho is a mountainous land that is surrounded, as if it were an island, by South Africa. In his introduction, Masilo remembers his many family members who were killed during the political troubles in Lesotho.

These are poems with a social conscience, not only for the grief over the loss of the speaker’s father, but also for others throughout history who have endured oppression and brutality.

In spite of the suffering the speaker witnesses, the poems also express the joy of life, the beauty of the seasons, the mountains, sensuality, and physical love.

The lines are musical, written with precision, care, and tenderness, displaying a deep sense of awareness of lyric language. As a US speaker of English, I enjoyed reading a smattering of African expressions, such as “bakkies” and the board game shax.

The bright red and blue cover art is by Lesotho artist Meshu Mokitimi, whose biographical notes are provided at the end of the collection. Mokitimi describes his style as being influenced by African Expressionists. The vibrant, strong lines of a woman sitting as if in contemplation sets the stage for these strong, contemplative poems.

Rethabile (“Ret” to those who know him) writes about Africa-inspired literature at his blog, Poefrika

His book can be purchased directly from the publisher, Pindrop Press,

or Barnes and Noble. 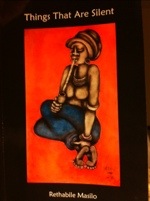 The howling wind tonight reminds me of Tess Durbeyfield when she wanders across the moors dressed in rags.  I read Tess of the D’Urbervilles around the same time that Nastassja Kinski appeared in Tess, a 1979 film adaptation of the novel,  but I haven’t yet seen the 2009 Masterpiece Theater version. Good times await!

Thinking of Tess brings to mind the nineteenth century and persona poems, both of which I love, and although The Suitable Girl (Pindrop Press, 2011) contains much more than period piece poems, there are some delightful ones to savor among the rich variety of poesy in Michelle McGrane’s latest collection.

The photo of the wine and my gorgeous copy of The Suitable Girl was taken at Kavarna, a coffee bar in Decatur, GA, near midtown Atlanta. The book is the first project from Jo Hemmant’s Pindrop Press. What a lovely debut collection! The Suitable Girl, in addition to Michelle McGrane’s wonderful imagination and gift for words,  reflects Jo’s attention to detail and her excellent taste in poetry. Jo, a fine poet in her own right, has a keen eye for the printed word and a well-tuned ear for verse.

The MFA program I’m starting in August has prompted me to make some huge changes, not all of them very easy to make. I’ve had to resign from teaching yoga at the YMCA on Mondays and Tuesdays because I’m going to be in class at those times. This is a tough goodbye for me, because I really enjoy the community at the Y, and I get a great feeling of peace and calm from teaching the classes.

I’ve also had to back out of my work with Pindrop Press, which is headed by Jo Hemmant. Most of you who read this blog know Jo, and know what a great person she is. It has been hard letting go of these activities, but my current financial and family situation have made it necessary for me to change directions.

And sadly, I won’t be editing ouroboros review with Jo any more, although hopefully I’ll be able to help Jo out if and when she needs it. It’s a fabulous magazine, mostly because of Jo’s attention to detail and her quest for high artistic quality. I’ll still support the magazine 100%, although it will mostly be from the sidelines from here on out.

Many thanks to Jo, who has taught me a lot about editing a magazine, and who has had to put up with my changing course in the middle of the stream.

In August I’ll be teaching English Composition to freshmen, tutoring at the university writing studio, and taking three graduate classes, in addition to being a mother to my high-school son. My college-aged son is fairly self sufficient, although there always seems to be something – a car problem, laundry, money, etc… . Oh, right, I also have a husband. I guess he needs me a little.

If I had super powers I’d ask for a brain that never got sleepy, the ability to do three or four things at once, plus enough confidence to never feel angst about anything new. In the meantime I fret.

For those of you not yet acquainted with the talented and lovely poet Michelle McGrane, there’s an interview with her on the blog 100 Readers, by Fiona Robyn.

Fiona’s new novel, The Blue Handbag, is due to be released in August of this year. On her blog she’s interviewing those who have read advanced copies of the book, which will be available on Amazon.

Many of you know that Pindrop Press has the honor of publishing Michelle’s next collection. Her book, The Suitable Girl, and will be Pindrop’s inaugural title. Michelle is also the featured poet in the second issue of ouroboros review, and has three poems included in our upcoming issue.

Michelle McGrane’s poems are a blend of sensuality, imagination,myth, and gritty reality. Spellbinding is an adjective that comes to my mind. She is more than an avid reader, and it shows in her poems, which are eclectic and reflect her wide-ranging interests. Michelle is a perfect example of someone who has read 100 books before she writes her own, and I respect her for it. It shows in her poems.

Jo and I are pleased to announce our new website for Pindrop Press. We have news there about our line up of poets whose work we’ll be publishing during 2010. Please visit the site, where you can also read sample poems from the upcoming books and follow links to the poets’ blogs.

When I was just starting out I had wanted to be a magazine editor and publisher, but I ended up going into education and teaching. Thanks to Jo, who has been a huge motivating force, I’m actually involved in the kind of work I had envisioned for myself when I was young. Pindrop Press is a result of our love of poetry, our study of literature, and Jo’s experience in the publishing world.

We continue to read for our third issue of ouroboros review, and are receiving scores of submissions. Thanks to all of you who continue to read the magazine and take the time to send us your fabulous poems.

Jo Hemmant and I are pleased to announce our new independent poetry press, Pindrop. We will be producing chapbooks (pamphlets) and full-length collections, working with new, emerging and established poets.

As many of you know, this is not our first foray into publishing: we are the editors of ouroboros review, a magazine for contemporary poetry and art which takes advantage of the latest technologies and appears both online and in print.

The press feels like a natural progression from the review and we are thrilled to have signed up the very talented South African poet, Michelle McGrane for our first book. Michelle has already written two collections of poetry, Fireflies and Blazing Stars (2002) and Hybrid (2003). This latest work will be out in early 2010, with a London launch.

Here’s an article about Michelle from KNZ Literary Tourism with an example of Michelle’s work, Mountain Picnic. You can also read three of her poems on pages 4 and 5 of ouroboros review, issue 1.