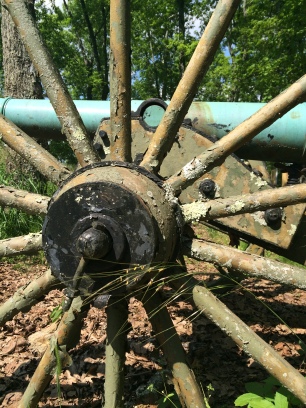 Many of my friends on social media  have said they were nauseous after the #RNCinCL ended. In spite of having  a two-day headache, I have been reading articles about the orange real estate tycoon, watching Bill Maher (whose opinions I don’t always agree with, especially his puerile views about religion), Steven Colbert, Jon Stewart, and other satirical videos, including this gem by Randy Rainbow, Ya got Trump Trouble!

In an effort to stop my incessant preoccupation with the rhetoric of hatred, I’m taking this online MOOC, Whitman’s Civil War: Writing and Imaging Loss, Death, and Disaster . The course is taught by University of Iowa professors Ed Folsom and Christopher Merrill. We are reading Whitman’s war poems and some of his prose writing and responding with both discussion comments and original work.

I want to write about my father’s death, the loss that is so immediate to me,  but I need to connect his dying  to these times we are living in: mass shootings in night clubs, elementary schools, and movie theaters, terrorist attacks overseas, the brutality of police toward Black citizens, the deaths of Anton Sterling, Philando Castile, Tamir Rice, Eric Gardner… (the list is too long), the ugly rhetoric of ignorant white supremacists, an arena full of people chanting for the imprisonment of the former Secretary of State.

Whitman wrote for everyone, for all of America. He recognized himself in the fallen soldier, the nurse, the mother saying goodbye to her son.

While it comes naturally to me to empathize with the plight of many Black people, I won’t be honest until I look deeply into the hatred coming from a fairly sizable chunk of the white population. Is there any way to transcend this hatred? Poetry and art might be the bridge.

The University of Iowa’s International Writing Program is offering a free, online poetry class, otherwise known as a MOOC. Each week we will listen to two video lessons and write poems based on suggested exercises.

Former poet laureate Robert Hass opened up the lecture series with a talk about writing poetry 1, 2, 3, and 4-line sketches. Rather than explain everything he says in the video, which was wonderful and inspiring, I will direct you to the blog of one of my classmates, Minal Hajratwala, a very accomplished writer in her own right. She has outlined the entire lesson and found links to the many poems Robert Hass cites (often from memory)–thank you, Minal!

The part of the lesson that inspired me the most has to do with “Bantu combinations.” According to Hass, while Bantu men were working together, one would call out a line.

The example he gives is: “An elephant was killed by a small arrow.”

The second person calls out: “A lake dries up at the edges.”

The idea is to find a similarity between the two images, but a surprising one. Here the connection is that the edges of a dried up lake resemble the elephant’s skin.

Some of these Bantu combinations, which previously existed only as spoken word, have been collected by Jerome Rothenberg in Technicians of the Sacred: A Range of Poetries from Africa, America, Asia, Europe and Oceania.

Here’s the four-line sketch I wrote for the exercise:

Where, in blues and grays, Missourians shot each other

Behind earthen battlements, a yellow-petaled cactus.