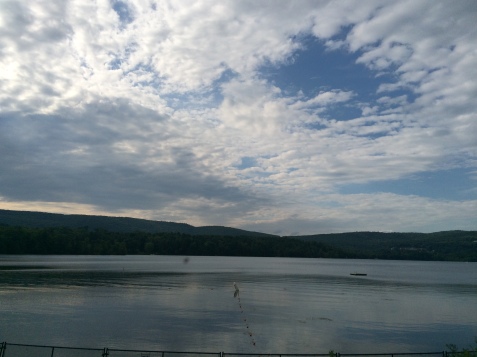 The Stockbridge Bowl, one of my favorite places to swim.

To get myself back into writing, I decided to compile different thoughts about the ocean by female swimmers, most of them open-water swimmers, and put them into a single poem, a kind of collage.

To be in the azure blue as if
You’re breathing. The body, immersed,
Amplified, heavier and
Lighter at the same time.
Looking down miles and miles and miles,
The sea is like a person–like a child
I’ve known a long time.
I never feel alone when I’m out there.
You will forget who you are,
What you did in your life,
And which country you are from.
There’s a knowledge that you
Really are on edge here,
And that you can push yourself too far,
All the way across that vast,
Dangerous wilderness of an ocean.
When I swim in the sea I talk to it.
No matter how rough, cold, or deep,
The water is your friend.
We go in the pitch black of the night.
When we’re in the water,
We’re not in this world. You are a swimmer,
And whoever is next to you
Is a swimmer, too, all of us in the water.

During the Olympics, I paid close attention to the swimming events, especially to women swimmers. Yusra Mardini’s story and words inspired me. She’s an eighteen year-old Syrian woman who swam in the Rio Olympics for Team Refugee.

She and her sister , when Mardini was still seventeen, swam in the open sea from Turkey to the Greek island of Lesbos for three hours in 2015, pulling a dinghy, and saved themselves and twenty other people.

The other swimmers whose words I have included are:

Diana Nyad, first person to swim nonstop from Cuba to Florida without a shark cage;

Gertrude Ederle, first woman to swim across the English Channel;

and Leanne Shapton, swimmer, writer, and author of the new memoir, Swimming Studies.

This kind of writing is called found poetry. As the Poetry Foundation explains, “Found poems take existing texts and refashion them, reorder them, and present them as poems.”