Red got into the dog biscuits and then spit up on our comforter. I washed the comforter, but it still smells like barf. Good thing I bought it on sale with a coupon!

He also chewed up my yoga mat while I was in the room with him. I was writing, or on Facebook, some kind of nonsense.

We’ve replaced the space heater whose cord he chewed. My meditation cushion is covered with dog hair. He has dug two giant holes in the yard and has tracked the dirt onto the living room rug.

He barks whenever Duffy is on my lap.

He barks a throaty, deep roar whenever Duffy yaps at the UPS drivers.

But he’s just amazed to find out each day that he’s a dog. Life perplexes him, and he yelps in response. He prances like a pony in a field when I come up the stairs. 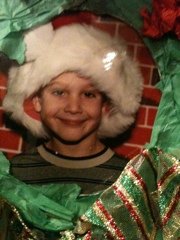