Aspens look like individual trees that grow up together, but beneath the surface, they form a common root system, a single seedling.

Humans are like aspens. Race is a contrived concept meant to separate us and keep us from growing together like an aspen colony. We come from a common seedling. We thrive in groups. We depend on love from our community for survival.

Southern plantation owners pitted poor whites and recently emancipated slaves against each other so that together they would not overpower their plantation bosses.

They drove home the idea that poor whites would have to accept their low wages because at least they weren’t black and wouldn’t be beaten or jailed for “vagrancy.” If a black man was found without work, he was subject to imprisonment, where he was once again forced to work without wages.

Today, our so-called president is a demagogue who attempts to create a wedge between us by inflaming these old fears and hatreds.

His overt enemies are the immigrant population and Muslims, but through his racist agenda, he’s turning back the clock on civil rights and criminal justice reform, among many other dangerous policies.

The problem of racism/white supremacy is the most important issue of our times. For the past 20 years or so, there has been a “colorblind” movement that has absolutely not worked. People have come up with devious ways to subvert the laws.

When I was younger, I used to think the term “white supremacy” only referred to neo-Nazis and the KKK, just as I put the word “racist” in that same category of people who verbally and physically attacked others based on their race or religion.

But the words are broader. Whenever we make assumptions about the behavior of an entire group of people (or a subset of that group) based on race, we are being racist.

It’s scary to admit that we have held racist or stereotypical views. But if we don’t forgive ourselves and others for these old views that we’re now discarding, we won’t make any progress. We won’t heal. We need to stop being defensive.

If we are white and have harbored old stereotypes about a certain group, we have been racist.

If we have remained silent about systems of oppression such as voter suppression, mass incarceration, and police brutality against people of color, we have been part of the problem.

If we see that the DREAM Act (DACA) is going to be dismantled and we say nothing, we are being willfully ignorant, no different than the white preachers who did not support Martin Luther King.

These are difficult conversations that require patience and compassion. White folks (myself included) tend to either “virtue signal” by showing what great allies we are, or we shut down and get defensive.

A therapist once said to me, “We inherit our lives.” White people inherited white privilege, even if that only perceived benefit was that we were white.

Most of us wish we had not inherited this unfair world, but at least we are living in a time when we can actually wake up and actively work to end the “myth of superiority,” as Toni Morrison has defined racism.

It’s time to mindfully reject any kind of racial or gender-based stereotypes by challenging our pre-conceived, inherited notions of who we are as individuals and as a society.

We need to have these difficult conversations and not let our EGOS get in the way.

We are not only like aspens, we are aspens. We will only thrive by working together, by caring for each other, by realizing that, as Martin Luther King wisely claimed, Injustice anywhere is a threat to justice everywhere.

Freeboarder and his girlfriend brought home a big basket of fresh Georgia peaches, the best I’ve ever tasted.

He is all in all to me, as is his brother, and their girlfriends and friends are dear to me too. I can only glimpse one tiny portion of the grief, the total collapse, that the parents in Norway are now experiencing.

And the mothers in Somalia, whose children are dying of hunger–a woman whose goats had died said, “I am doubly cursed, because I gave birth to twins during a drought.” Her son Emmanuel lived, but baby Miriam died. During the video report on CNN, she was feeding her two surviving children leaves she had found on the scorched earth. They ate the paste she made for them out of her hand.

The very least I can do is dedicate these peaches to the mothers and fathers who have lost their children. My gratitude is tenuous, and I cherish my ability to feel it. 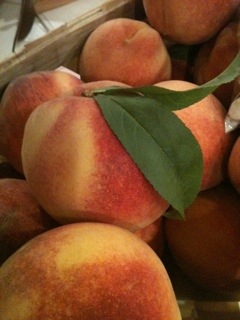 On Sunday my son Freeboarder came upstairs telling us ‘you have to see this documentary,’ so we turned on the TV, and there on our screen was one of the saddest stories I’ve seen in a long time, a National Geographic documentary about a Chinese boy with a horrible facial tumor, billed as China’s Elephant Man. I guess they were trying to attract viewers, but the title seems wrong, antithetical to the spirit of the documentary, which was to tell the young man’s story with compassion. The family even states in the video that they never wanted their son to be a circus sideshow.

I was struck by the love and care he received from the villagers and his family, but I had a hard time watching the images. I ended up leaving the room after a few minutes. The next day when I took Freeboarder to the mountains for some outdoor bouldering, I kept seeing the young man’s face in all the outcroppings of sandstone. His misshapen mouth, the folds of his flesh, the way he had to support his skin and the tumors wrapped inside on the table as he sat to play cards.