Halfway through Bitter Fame, a Life of Sylvia Plath by Anne Stevenson, I can say that although she does not paint as sympathetic a portrait of Plath as does Alexander in Rough Magic, she does get to the inner struggles Plath experienced that led to her poetic apotheosis in a more acute way.

Alexander had access to Sylvia’s mother while writing his biography, but he was writing blindly, because Ted Hughes did not allow him to view Sylvia’s letters or journals.

Hughes’s sister, Olwyn Hughes, worked with Stevenson and allowed her to quote extensively from Plath’s journals and letters.

Plath’s letters to her mother, as one might expect, give an optimistic report of Plath’s active social life and hard work at Smith and later at Cambridge, while her journal entries show she had an active, healthy sex life that unfortunately plagued her.

Part of Plath’s problem lay in her inability to reconcile her “swing from violent vampire to virtuous nun,” as Anne Stevenson writes (28).

The controversy around Plath’s life and death centers around her relationship with Ted Hughes. Obviously, she had an artistic temperament and was ambitious to the extreme. At the same time she was conformist and wanted to raise a family like her mother did.

Even though I was born three decades after Plath, I understand her ambivalence about motherhood, art, sexuality, and a career.

But her angst and passion led her to explore or flirt with death. She was too impatient to find out what lay beyond the moon at night.

Of course the shock of losing Hughes would have brought about a despair she couldn’t find a way to exit, but reading her Ariel poems, one realizes she was in the throes of a Dionysian fury that went beyond Hughes.

In the end, casting the blame for her death on Hughes means nothing. There are only the poems, which are as grand and sharp as polished steel. 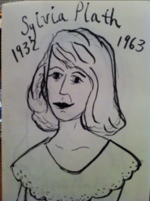