My new nickname for Philosopher is Sadhu, Sanskrit for “spiritual seeker.” I think the word might be similar to the Buddhist “bodhisattva.”

My younger son Freeboarder is leaving for art school in a few days. His nickname remains the same. As I write this post he’s somewhere in the city doing ollies with his new board.

Sadhu came over to stain the deck for us, and he left some napkin art in his wake. 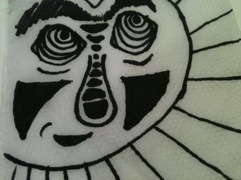 Do you notice the resemblance between his doodle and the 18th century headstone I saw recently in the Berkshires? When he was a very young child, we went to this cemetery while we were walking up Cone Hill. 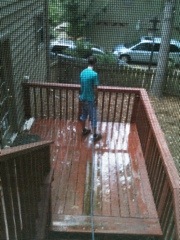